Atlas Film Distribution employs a deliberate, reasoned, and transparent process to each release. From testing, to planning, to booking, to marketing, to settlement, to VoD, all phases of a film’s release life cycle are monitorable and measurable. 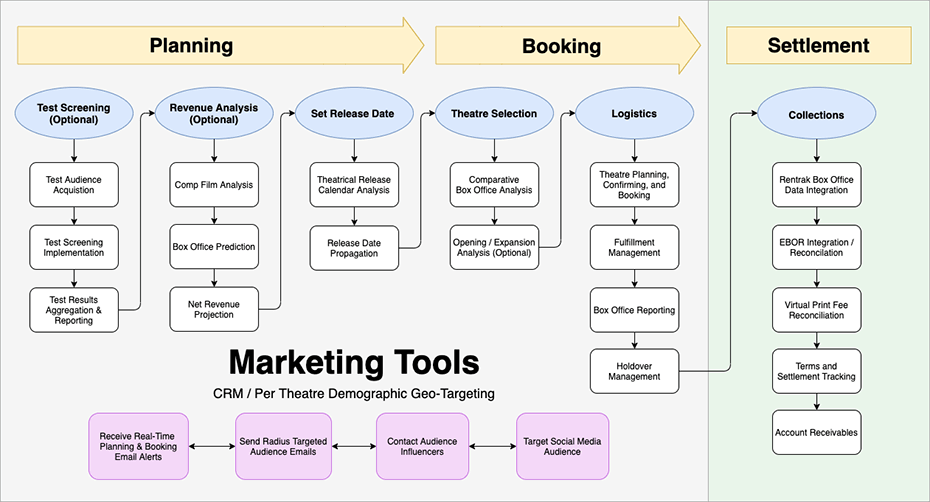 Want to know how your film will be received in the real world? Looking for your "top line" and how it compares to films like yours? Want to know your real box office potential? There is no more accurate movie testing facility available than iScreeningRoom.

Understanding historical performance per theater, based on previously released comparable films is paramount to evaluating potential and planning your theatrical release. Factors weighed include genre, critics score, audience test screening score, studio type, ratings and more. In real time, CinemaCloudWorks’ Comp Film engine analyzes and grades all films released in the USA within the past 10 years.

Booking your film into theaters is going to require a team who knows who to call and how to pitch your film. The Atlas Distribution film distribution team consists of former sales managers from Sony, Fox, and others, ensuring your title has the absolute best representation possible at game time.

Once the dust settles, it's going to be time to invoice and collect. Atlas Distribution's film distribution team knows all of the ins-and-outs of collections and employs proprietary state-of-art settlement tracking software to ensure every penny is accounted for. The best part? You get to watch the entire process with complete transparency as the money comes.

Moving from your theatrical release to home video can be a daunting task. Luckily Atlas Distribution's film distribution team understands how to safely and securely move you into, what just might be, the most profitable phase of your release cycle. From DVD, to Netflix, to iTunes, to Amazon Prime Video, to Google Play, to RedBox and beyond, Atlas Distribution has you covered.

Atlas Distribution looks forward to serving you.
We respect your privacy.